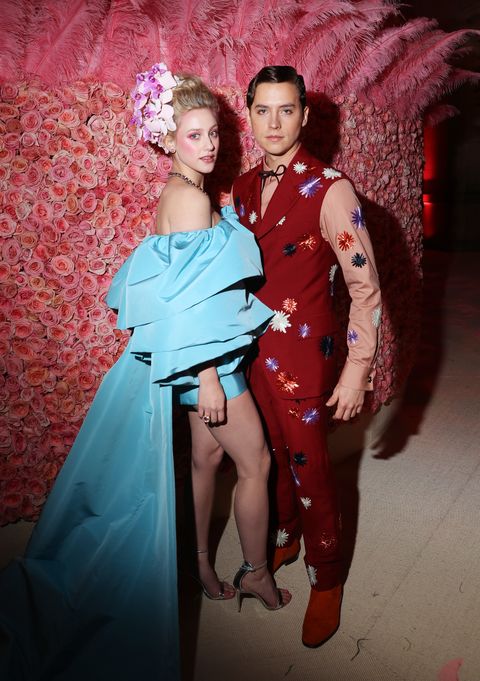 Cole Sprouse and Lily Reinhart have broken up, Page Six confirms. The publication says the two recently split and have been quarantining separately during the global pandemic.

Sprouse and Reinhart, who played Jughead and Betty on Riverdale, are known as “Bughead” by fans and sparked dating rumors as early as February 2017. This breakup news doesn’t exactly come as a surprise. In February, the two posed separately on the red carpet at the Vanity Fair Oscar party. In April, Reinhart told W Magazine that she was quarantining alone with her dog, Milo.

Although we don’t know exactly when this split happened, it seemed to be a done deal by last week, when Sprouse’s on-screen Riverdale dad, Skeet Ulrich, appeared with his girlfriend, Megan Blake Irwin, on her Instagram Live, where they answered fan questions.

Some fans have speculated that the couple broke up in April, but a source told E! News that the two, were still together.

“Lili and Cole are still together. They haven’t been [in quarantine] together but haven’t split,” the source said.

This followed rumors that Sprouse cheated on Reinhart with Kaia Gerber. Sprouse posted a series of Instagram stories to refute the rumors:

“I tolerate a lot of rumours and slander from people online claiming to be my fans,” he wrote. “Fans who feel entitled to my privacy precisely because I never indulge them. But attacking my friends, baseless accusations, leaking my address, and sending death threats are all qualities of insanity and fanaticism. Choose humanity stop being [clown emoji]. When I first stepped into a public relationship this was one of the foreseeable consequences. And while I never truly intend to indulge any part of my private life to the ravenous horde, it’s clear my restraint in updating them has allowed them to push their own agenda onto my habits and lifestyle. So in conclusion—please eat my delectable plump ass. (making me post a goddamn white font insta story like in twice divorced mother of three).”

This is Your Chance to Smell Like Rihanna
All About Jade Carey, the Elite U.S. Gymnast Competing At The 2021 Tokyo Olympics
How To Fill In A Patchy Beard
Canada’s New Governor General Wore an Indigenous Ensemble To Her Inauguration
The Best Products To Slay Your Edges This Summer