For most of us, fragrance evokes deep emotion and meaning. Like a song, it can instantly bring you back to a moment, a feeling, or a memory of where you were when you first smelled it. Your attachment to a scent can be so deep that it becomes part of your identity—a specific olfactory indicator that’s associated with who you are and how you want to be seen, even remembered. And a new fragrance, like a drastic haircut, often accompanies a significant personal change. When I reflect on my own lineup of scents, it feels like I’m looking at an aromatic soundtrack of my life.

My first perfume, at age 15, was Lauren by Ralph Lauren—the quintessential scent for young Manhattanites. Next, I had a dramatic moment with Poison by Dior in 1987, during my freshman year of college. It was strong and overwhelming, which technically could have defined my personality at the time, too. When I transferred from Ithaca College to NYU, my perfume morphed as well: Enter Xeryus by Givenchy. I thought I was hip, smart, and sexy to wear a man’s cologne. (I was not.) My first apartment coincided with a short stint of Annick Goutal Eau de Charlotte. It was light, feminine, and pretty. (On a good day, I was feeling that way, too. Early twenties, single, living in Manhattan.)

A 20-year love affair with the classic, citrusy-green Calyx by Prescriptives followed, which, after a long-term relationship ended, I left for the two current perfumes I’ve alternated between for the past five years: Pacific Lime by Atelier Cologne and Park Avenue South by Bond No. 9. The former is clean, crisp, and fresh, with a fruit-forward smell—just different enough from Calyx to feel distinct. The latter is an enigma to me, as it smells like nothing I’ve ever been exposed to before. It doesn’t smell the same on my skin as it does straight from a tester. Part of its appeal is its elusiveness. I didn’t have a single reference for it—no memory, no past emotional association. 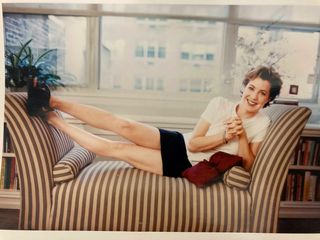 The Author in her late twenties in 1996, the beginning of her Calyx Love Affair.

When big life moments happen, the desire to reboot your scent is a normal, healthy response. “There is some psychological and neurobiological basis for wanting to change your perfume,” says Julie Walsh-Messinger, a psychologist and assistant professor in the department of psychology at the University of Dayton, who focuses on olfaction, emotion, and social behavior. “Making a change mentally gives us power and impacts our emotions. If you go through a breakup, the last thing you want to do is smell something that makes you feel sad. Switching your perfume is easy. It helps you manage your emotions, lets you stay away from old memories, and allows you to create new ones.”

It’s no secret that our sense of smell offers one of the strongest links to our feelings and memories.

Later in life, when you smell something, you are brought back to a specific moment or event – Dawn Goldworm

Like a song, it connects and stimulates a specific, though different, part of the brain. “The pathway from the nose is the shortest and most direct way to activate the limbic system in the brain, which is responsible for creating, reactivating, storing, and recalling memories and emotions,” says Alfredo Fontanini, MD, PhD, neuroscientist, professor, and chair of the department of neurobiology and behavior at Stony Brook University and a co-director of its Neurosciences Institute. “Each perfume is associated with different recollections and experiences. As you form new memories, older ones and emotions tend to fade. When you try a new perfume, you are trying an odor that has no associations, so it gives you the possibility to make new ones and write new memories.”

Remembrance of Things Past, Volume I: Swann’s Way & Within a Budding Grove

According to Dawn Goldworm, an olfactory expert who’s worked with the likes of Lady Gaga and the Olsens, “Everyone scents themselves culturally. For some, it’s a sign of their generation,” she says, adding that olfactory memories continue to grow and become the largest, most heightened part of your memory. Novelist Marcel Proust famously captured this direct and visceral sense/memory connection in his evocation of a tea-soaked madeleine in Volume 1 of Remembrance of Things Past. (Fun fact: Taste is mostly perceived by smell.) “Later in life, when you smell something, you are brought back to a specific moment or event,” Goldworm says. “You remember how you feel. If it makes you feel good, you keep it. If it doesn’t, you change it.”

Through her work as a co-founder of 12.29, an agency that helps brands to differentiate themselves through smell, Goldworm has zeroed in on two main groups of perfume purchasers: loyalists and butterflies. Loyalists, like me, stick to the same scent for years. “They change only when they don’t want to be reminded of the past. It’s a knee-jerk reaction and an empowering one,” Goldworm explains.

For me, my breakup wasn’t just with a person. I was pretty married to Calyx, but I needed something new to help me move forward.

Butterflies, on the other hand, do not want to bond or connect with one perfume. Like their lipsticks and handbags, their scents are interchangeable; they have dozens they wear whenever the mood strikes. They are carefree, unattached, and spontaneous. “Butterflies go for what’s hot, cool, and new. Their perfumes are maybe only a quarter used because they never finish a fragrance,” Goldworm says.“They use perfume as an accessory, as opposed to an identity. They won’t change perfumes when life-changing events happen, because they have no particular connection to them. Rather than switch fragrances, they might go on a trip or make new friends.”

Thanks to the pandemic, many of us are looking for a definitive change. Goldworm suggests a total sweep of any scents that might remind you of this traumatic period. “Throw out any detergents, candles, shampoos, toothpastes, body lotions, or perfumes, and introduce new ones into your home,” she says.

Though that sounds a bit drastic, who doesn’t want a fresh start? The world is different now, and so am I. Recently, Loubidoo, a new fragrance from Christian Louboutin, caught my attention, with its playful cap of a cat holding a lipstick. When I look at it, I see a symbol of good fortune, and the scent is laced with strawberry and rose. Perhaps the smell of optimism is in the air.

Launched in 1978, Lauren is soft and fresh. Its top notes are rose, lily of the valley, and jasmine, with hints of warm, rich cedarwood and vetiver accord.

Headlining with a spicy floral elixir, Poison features notes of orange blossom, plum, and wild berries. Introduced in 1985, this fragrance packs a punch.

A classic men’s juice of its era, this woodsy fougère launched in 1988, just around the time of Givenchy Xeryus (now discontinued)—making it a fitting replacement.

An icon created by now-shuttered cult brand Prescriptives in 1986, Calyx is a mix of fresh grapefruit, green leaves, mandarin, and other citric, floral notes.

Released in 2015, it pops with green apple, jasmine, and velvety peach, with an amber

and musk base that’s earthy and warm.

My all-time favorite scents read like the Top 40. While some were one-hit wonders—as in, I wonder how I thought I could pull that off?—others were timeless classics.

This article originally appeared in the June/July 2021 issue of ELLE Magazine.

Get the Latest Issue of ELLE

Kylie Jenner Unveils Kylie Cosmetics‘ Relaunch and New Smudge-Resistant Lip Kits
The Iconic Isabel Marant Wedge Sneaker Is Back
Director of New Simone Biles Documentary Said Simone Is “Like a Superhero” When She Competes
13 Reasons Why Star Tommy Dorfman Believes Self-Love Is a Form of Activism
Tracee Ellis Ross is the New Face of Tiffany & Co.