It was only a matter of time until it happened: The first PDA photos of back-on couple Ben Affleck and Jennifer Lopez have emerged. Bennifer was photographed arriving for a dinner date at Wolfgang Puck’s restaurant at the Pendry hotel in West Hollywood on Monday. They were full-on cuddly in front of the cameras, with Affleck and Lopez embracing at one point, as seen below. Page Six has more photos of the outing here. 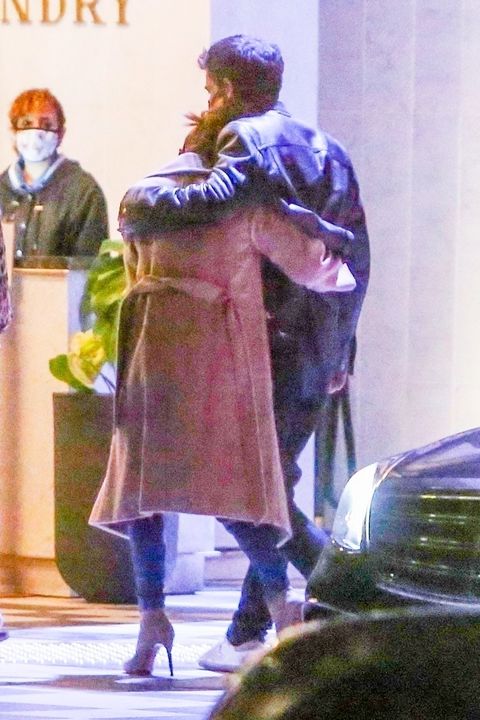 Lopez dressed fashionably in a pink turtleneck and trench with heels. An eyewitness told E! that “Ben had his arm around Jennifer at dinner and they weren’t shy about being affectionate. He looked great and seemed very happy. She also looked happy and kept leaning into him.”

Several new reports have come out this week detailing how well things are progressing between the couple. Us Weekly reported yesterday that the two are very much in the honeymoon phase.

“Jen and Ben have been all over each other and can’t seem to get enough—all day, every day,” a source told the outlet. “Their chemistry is off the charts.”

People reported on Tuesday that they’re even beginning to talk about a serious future together. “They will continue to travel back and forth between Los Angeles and Miami,” an insider told the outlet. “They are very happy together.” That source added that they are “slowly starting to talk about the future. This is not a casual relationship. They are taking it seriously and want it to be long-lasting.”

A source close to Lopez told E! that she’s smitten with Affleck and is committed. “She’s crazy about Ben,” the source said on Tuesday. “He spoils her with love and is very witty and charming. He’s a man’s man, and she finds him so attractive and strong. She’s in it for the long term and sees her future with him.”

Burn Fat and Build Muscle With This 1-Week Weightlifting Workout Plan
All About Lori Harvey, Michael B. Jordan’s Girlfriend
These Are The 25 Best Body Products You Can Buy On Amazon
You Don’t Need Any Equipment to Sweat It Out With 3 Intense New Instagram Live Workouts
Chrissy Teigen Apologizes Amid Bullying Controversy: “I Was a Troll, Full Stop”