Meghan Markle and Prince Harry announced they were expecting their second child on Valentine’s Day in 2021 after the Duchess of Sussex suffered a miscarriage last summer. They shared the gender of their baby (a girl!) while speaking with Oprah during their big March interview. But otherwise, the couple has kept the majority of details about Meghan’s pregnancy and their plans to welcome their daughter private.

Here’s everything we know so far, from the rare glimpses Meghan has given of her maternity style to reports about where the Duchess hopes to give birth to her daughter.

Meghan and Harry are having a baby girl this time, due this summer.

The couple revealed they knew their baby’s gender during their interview with Oprah in March 2021. “To have any one or any two, but to have a boy and then a girl—what more could you ask for?” Harry said. Meghan and Harry did not specify exactly what month Meghan is due.

Meghan is so far along that her doctor advised against her traveling in April for Prince Philip’s funeral.

While Meghan and Harry have not revealed Meghan’s exact due date, a royal spokesperson gave a hint on April 10. One day after Prince Philip passed away, the Palace confirmed that Harry would be traveling back to England for his grandfather’s funeral. The Duchess of Sussex “has been advised by her physician not to travel,” a royal spokesman told People.

Royal reporter Omid Scobie wrote that he was told by a source that Meghan “made ‘every effort’ to travel but didn’t receive medical clearance from her physician.”

Generally, those pregnant are advised not to fly after 36 weeks, according to Mayo Clinic. But the coronavirus pandemic adds an extra layer of risk to travel for everyone, which is why most states advise against non-essential travel. It is not known whether Meghan and Harry have gotten COVID-19 vaccines yet. (It is safe for Meghan to receive one even while pregnant, according to the CDC.) They technically were not eligible when news of Prince Philip’s death broke.

Meghan reportedly has chosen not to have a baby shower for her daughter amid the ongoing COVID pandemic.

Us Weekly reported on May 12 that Meghan decided to forgo a baby shower this time—and the pandemic isn’t the only factor behind the Duchess’s decision. A source explained, “Meghan doesn’t feel a big baby shower with gifts is appropriate right now. There is too much strife in the world. She and Harry have been so involved with humanitarian issues, they both feel their time and resources can be used for a better purpose.”

Meghan spoke about her daughter during her Vax Live speech in May.

Meghan has remained relatively out of the public eye during her pregnancy, but she made a rare appearance in a red poppy Carolina Herrera dress during Global Citizen’s Vax Live concert that she and Harry co-chaired. The special aired on May 8.

In her speech advocating for COVID vaccine equity and gender equality, Meghan referenced her future little girl: “My husband and I are thrilled to soon be welcoming a daughter,” she said toward the end of her remarks. “It’s a feeling of joy we share with millions of other families around the world. When we think of her, we think of all the other families around the globe who must be given the ability and support to lead us forward. Their future leadership depends on the decisions we make and the actions we take now to set them up and to set all of us up for a successful, equitable, and compassionate tomorrow.”

“We can confirm that Archie is going to be a big brother. The Duke and Duchess of Sussex are overjoyed to be expecting their second child,” a spokesperson for the couple told press. A photo of Meghan during her pregnancy and Harry, taken by photographer Misan Harriman, was shared with the announcement.

Don’t expect a baby #3: Harry and Meghan have both spoken about only wanting two kids.

The couple has spoken multiple times about planning to only have two children.

Harry first revealed their plans to have two children at max in a British Vogue July 2019 interview. When speaking about climate change to Dr. Jane Goodall, the Duke said becoming a dad changed the way he looked at the issue.

“It does make it different,” he started. “I think, weirdly, because of the people that I’ve met and the places that I’ve been fortunate enough to go to, I’ve always had a connection and a love for nature. I view it differently now, without question. But I’ve always wanted to try and ensure that, even before having a child and hoping to have children…”

“Not too many!” Goodall cut in, laughing.

“Two, maximum!” Harry said. “But I’ve always thought: this place is borrowed. And, surely, being as intelligent as we all are, or as evolved as we all are supposed to be, we should be able to leave something better behind for the next generation.”

Meghan and Harry reiterated their plans to Oprah during their March 2021 interview.

“To have any one or any two, but to have a boy and then a girl—what more could you ask for?” Harry told Oprah. “But now we’ve got our family. We’ve got the four of us, we’ve got our two dogs. Done.”

“Done—two is it?” Oprah asked.

Meghan and Harry’s daughter is a rainbow baby.

A rainbow baby is a healthy child welcomed after the mother suffers a miscarriage, stillbirth, infant death, or neonatal death, according to Healthline. Meghan eloquently wrote about her experience suffering a miscarriage in the summer of 2020 in a New York Times op-ed published in November 2020.

The Duchess wrote about the moment she realized it was happening and how she had been with her firstborn son Archie:

After changing his diaper, I felt a sharp cramp. I dropped to the floor with him in my arms, humming a lullaby to keep us both calm, the cheerful tune a stark contrast to my sense that something was not right.

I knew, as I clutched my firstborn child, that I was losing my second.

Hours later, I lay in a hospital bed, holding my husband’s hand. I felt the clamminess of his palm and kissed his knuckles, wet from both our tears. Staring at the cold white walls, my eyes glazed over. I tried to imagine how we’d heal.

She added later in the piece that “losing a child means carrying an almost unbearable grief, experienced by many but talked about by few. Some have bravely shared their stories; they have opened the door, knowing that when one person speaks truth, it gives license for all of us to do the same.”

Meghan during her first pregnancy with Archie.

Glimpses of Meghan’s maternity style have been rare so far, but two photos of her having come out so far showcasing her style.

Meghan appeared in a Oscar de la Renta dress for a Spotify appearance: 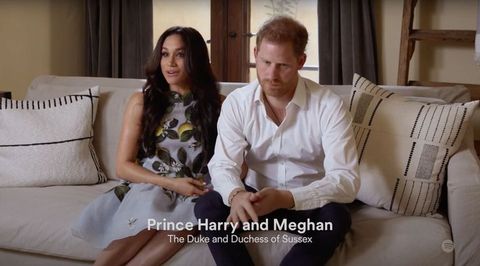 And in a second family portrait taken by Misan Harriman, Meghan wore a floral, off-the-shoulder dress with Archie and Harry:

Meghan may have a home birth.

Don’t expect Meghan and Harry to reveal their exact birth plan for baby #2, as the couple are no longer working royal family members and have embraced their newfound privacy in California. But Page Six reported at the end of March that Meghan is considering a home birth at her and Prince Harry’s home in Montecito. It’s a tabloid, so make what you will of its sources.

A source told the tabloid that “Meghan’s plan was to have a home birth with Archie, but you know what they say about the best-laid plans. In the end, her doctors advised her to go to hospital and all she was interested in was about delivering Archie safely. But she has a beautiful home in California, it’s a beautiful setting to give birth to her baby girl.”

Meghan’s daughter likely won’t have a title at birth but will become a princess later once Prince Charles takes the throne.

Page Six reports that Meghan and Harry’s daughter will become a princess by default when the baby’s grandfather, Prince Charles, becomes king, as all grandchildren are entitled to prince/princess titles then. Archie will also become a prince.

That said, given all the controversy with the royal family (and the Queen being alive, well, and on the throne at the moment), it isn’t clear now whether that will officially happen or not. Meghan opened up to Oprah in March about the private battle she and Harry had with the family over Archie’s title at birth and how the royals refused to give Archie a prince title or security.

Meghan wanted her son to have a prince title “if it meant he was going to be safe, of course. All the grandeur around this stuff is an attachment I don’t have…the most important title I will ever have is mom.”

She added that part of the reason she was upset that “the first member of color in this family isn’t being titled in the same way as other grandchildren would be….Also it’s not their right to take it away. Even with that convention [that allows all grandchildren of the monarch to be prince and princess], they said, ‘I want to change the convention for Archie.’ Well, why?”

Meghan added that reports she and Harry didn’t want Archie to have a title weren’t true. “No, and it’s not our decision to make [on whether he’d have a title],” she said. “Even though I have a lot of clarity of what comes with the titles good and bad…that is their birthright to then make a choice about.”

Both Page Six and Vanity Fair have reported that the Duchess of Sussex is planning to take maternity leave following the birth of her daughter. A “friend” of the couple told Vanity Fair‘s royal reporter Katie Nicholl that Harry will take time off too. “They will both take some proper time off,” the source said. “It will be the summer and they want to make sure they both take their leave so they have some real quality time together once the baby arrives.”

Meghan has not revealed her exact due date for her daughter, but Page Six reports it was told that the Duchess will begin her maternity leave in late May. Meghan’s rep declined to comment on the story, and the Sussexes are not likely to officially share Meghan’s maternity leave start and end dates. The couple has made a point to keep Meghan’s pregnancy as private as possible—something their lives as non-working royals in California allows them to do.

Laneige’s Iconic Lip Mask Is Available In a Summery New Flavour + More Beauty News
Kourtney Kardashian Cuddled Up With Travis Barker in a White Crop Top and Green Cargo Pants
You Don’t Need Any Equipment to Sweat It Out With 3 Intense New Instagram Live Workouts
Improve Your Cardio Endurance, Core Strength, and Mobility With This Flow Workout
Everything You Need to Know About Never Have I Ever Season 2