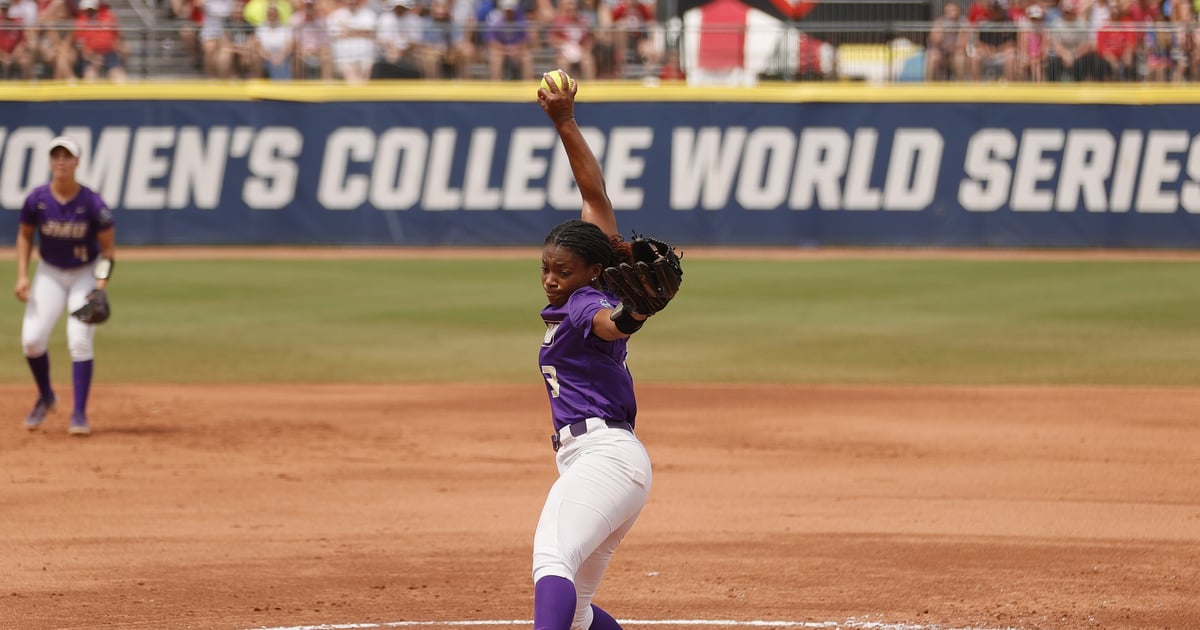 Odicci Alexander had a Women’s College World Series (WCWS) to remember. The James Madison University (JMU) pitcher threw 64.2 innings as the underdog Dukes made a dream run through college softball’s championship tournament, defeating four teams in the top 10 and one team in the top 25 and becoming the first non-seeded team to ever start the WCWS 2-0.

Alexander put the team on her back throughout the tournament, posting a 2.92 ERA (earned run average) with 66 strikeouts that ranked second in the tournament. The performance that really put Alexander and JMU on the map was a stunning upset of No. 1-ranked Oklahoma in the first round of the WCWS, sending the Dukes to the winners’ bracket, where Alexander subsequently held No. 5 Oklahoma State to one run in a 2-1 victory. In that game, Alexander shone defensively as well, fielding a bunt and diving to tag out a runner at home to preserve the Dukes’ lead. Then JMU once again faced off with Oklahoma, who had advanced through the losers’ bracket after the first round loss. The Dukes dropped the first game, forcing an elimination game in which Alexander and JMU couldn’t quite quite pull off the last miracle.

Despite the exit, JMU’s incredible run and Alexander’s transcendent performance took the softball world by storm. When she left the final game in the sixth inning, it was to a standing ovation — from a crowd comprised of mostly Oklahoma fans, who filled the Sooners’ home stadium. “A lot of people didn’t really think that we could do this,” Alexander said in a postgame press conference. “But we believed in ourselves. We stayed within ourselves, and we fought.”

It was Alexander’s final outing for JMU, and the senior has left her mark. Even before her WCWS heroics, Alexander was named the Colonial Athletic Association’s 2021 Pitcher of the Year and secured a Rookie of the Year award in her freshman year, along with two Player of the Year awards. After 139 career games with JMU, Alexander has built a legacy that college softball fans won’t soon forget. Check out highlights of her incredible performance ahead.

Resort 2022 is Teasing Us With Future Getaways
Under Armour’s 2021 Pride Collection Celebrates “All Athletes — No Exceptions”
Tracee Ellis Ross Shared Her Go-To Eye Cream for Dark Circles and Puffiness
All the Important Things Dr. Jill Biden Is Telling Us With Her Clothing
You Don’t Need Any Equipment to Sweat It Out With 3 Intense New Instagram Live Workouts