Jill Biden and Queen Elizabeth kept the late-spring vibes alive at Windsor Castle today, as they met for their first tea during Joe Biden’s presidency. Dr. Biden went for a powder blue dress and matching jacket, along with nude Valentino heels and a floral diamond broach, while the Queen opted for a pink floral dress and matching light-pink hat. 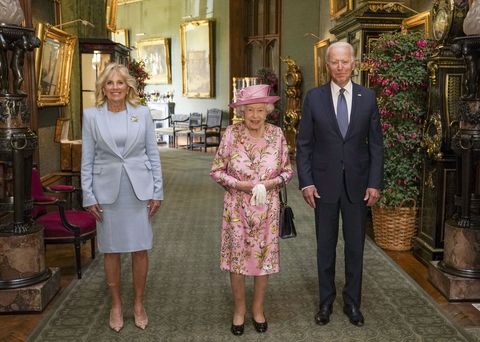 The first lady met the monarch on Friday at The Eden Project in England, at the G7 Summit. Prince Charles, Camilla, Duchess of Cornwall, Prince William, and Kate Middleton were also present.

On Friday, CNN reported that Dr. Biden was asked whether she had asked Kate any advice on how to talk to the Queen during their visit at a primary school in Hayle, Cornwall.

“No I didn’t!,” she reportedly said. “We’ve been busy. Were you not in that room? We were talking education.”

CNN talked to a longtime acquaintance of the first lady’s who said, “Put her in a palace with a Queen, or wherever you want, ‘she’s Jill from Philly.’”

President Biden first met Queen Elizabeth when he was a young senator in 1982 when, according to his memoir, his mother told him not to bow down to her. Thirty-nine years later, Biden, now the president, was thinking about his mother today.

“I don’t think she’d be insulted but she reminded me of my mother, the look of her and just the generosity,” he told reporters, per Reuters. He continued, adding that they had a discussion about some of the other political leaders he would be meeting on his European tour.

“She’s extremely gracious, that’s not surprising, but we had a great talk. She wanted to know what the two leaders that I—the one I’m about to meet with, Mr Putin, and she wanted to know about Xi Jinping, and we had a long talk.”