For much of 2020, I was in Portland, Oregon, where I live part-time. During my quiet, solitary existence, I was surrounded by nature. I became more attuned to the magic of trees and birds. A robin built a nest on my deck for the first time in the seven years I’ve lived in my Portland home. Over the course of a few days, I watched the robin carry materials, pieces of fuzz and twigs, in its beak to the top of a gutter downspout on my deck. The bird was building its nest as I was finishing my book, Assume Nothing: A Story of Intimate Violence, about my becoming entangled in an abusive relationship with the former attorney general of New York State, Eric Schneiderman, and about the global domestic violence crisis broadly.

I tried at first to watch over the nest. I wanted to protect it. I loved that little robin, but it seemed to be spooked by my presence. I figured out that I had to get out of the way and let it do its thing. By the third day, it seemed to have gotten used to me. It didn’t flee when I opened the door to the deck or sat down to eat at the small dining table that looked out on its nest. The robin compelled me to look out and up more than usual. It was me, myself, and I… plus the robin and the trees. I wished I could bring them closer to me inside.

I searched for information about robins, the length of their incubation and fledgling period. It seemed that we would be housemates for about a month, which was how long I had left to deliver the manuscript. It made me happy every day to look out and see the nest, a brilliant feat of engineering. I was proud of the bird that had built it. I was honored that it had chosen my house to build it on. I felt that the robin blessed my house. One night I heard little chirps coming from the nest, and my heart soared. I looked up the symbolism of robins: “If the robin visits you at a certain moment of your life, then you should listen to its song. [It] will help you see things from another perspective, and it will help you understand the truth.” Robins signify passion, new beginnings, and renewal. 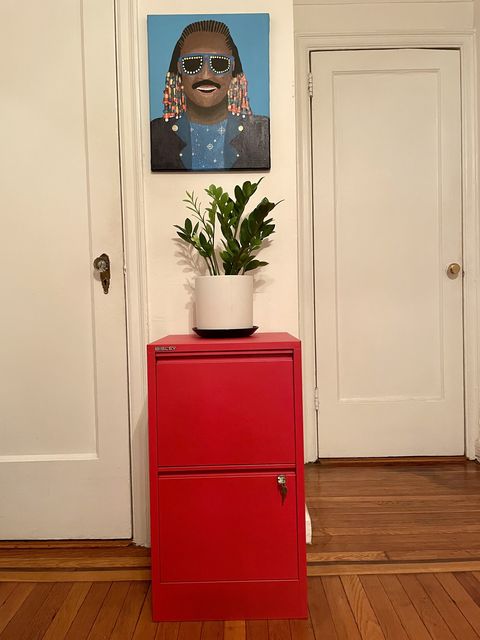 One of my ZZ plants, and Stevie Wonder. I like ZZs because a shopkeeper told me they could “grow in a closet.”

Courtesy of the author

On the day I turned in the manuscript, I returned to New York. I was happy to be back but missing the communion with nature that had sustained me in Portland. Around Christmas, a friend sent me a plant, a holiday cactus. Because I knew I would be in New York for the foreseeable future, I felt that I could take care of it. But the cactus seemed lonely, so I decided to get it a companion. I looked into plants that could grow in low-light environments. I landed on a ZZ Plant. As the shopkeeper told me, “It can grow in a closet.” I put it in my living room. The ZZ originated in eastern Africa. It is otherwise known as “Zanzibar gem” and “eternity plant.” I was thrilled to watch six new shoots of a bright green hue rise and then tower over the original, darker green shoots. I bought two more ZZs, one for my office and the other for my bedroom.

Soon after I purchased the succulent in the unicorn planter, I wanted an animal companion for it. I bought an elephant planter, and the shopkeeper helped me pick a philodendron. Translated from Greek, its name means “love tree.” The heart-shaped leaves seemed to tickle the elephant as they grew higher and flopped around its ears. 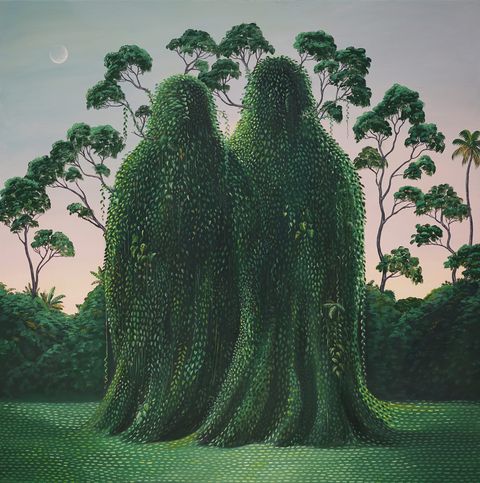 The plants kept me company as I prepared myself for the release of my book in late February. Because of its subject matter—my trajectory of witnessing as a child domestic violence between my parents and then experiencing domestic violence as an adult myself—I knew that I would be exposed publicly in ways that would be painful and uncomfortable. So I tried to focus on the intention that the book would help others spot, stop, and prevent intimate partner violence. The plants brought me intimate pleasure to counter the intimate violence of my story. I emerged from writing the book feeling stronger than before, but talking about it over and over again to the press sunk me into a depression. I was partially humiliated by what had happened to me.

The comfort I derived from the plants made up for the discomfort I felt around people.

I will try to put into words my depression: I didn’t want to wake up, and I didn’t want to go to sleep. During the hours in between, I felt pain acutely in my gut. It was a sinking feeling. It was a caving-in feeling. It felt as though my heart were burning down. It felt like hopelessness. Negative thoughts spiraled in a seemingly infinite loop. I did not want my torpor to end. I struggled and asked myself, “What do I do when many people want to see me but I want to see almost no one?”

The comfort I derived from the plants made up for the discomfort I felt around people. As an artist, my greatest fear is that no one will see my work. In the depths of my depression, I worried that no one would buy my book. The plants brought me solace. A plant does not care if I’m a bestseller or not. The plants also helped me understand that just as I couldn’t know which way they would grow, I couldn’t know which way my book’s life would emerge. Sometimes plants grow sideways and then tall, and sometimes plants need more watering and tending, like books. Similarly, like fledgling robins, once a book is out in the world, it must learn to fly on its own. 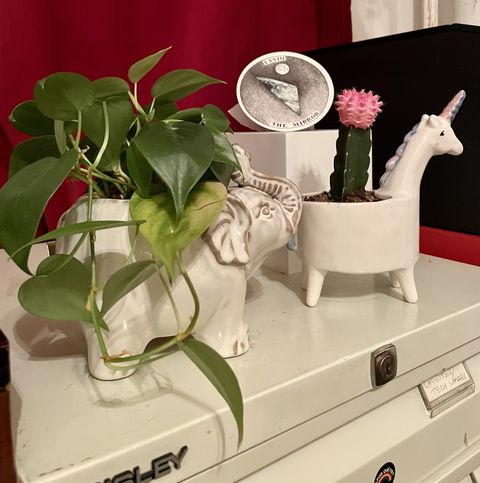 My succulent and unicorn planter with its animal companion, a philodendron in the elephant planter.

Courtesy of the author

During the pandemic, wildlife thrived, birds took over, pollution plummeted. Pre-pandemic, my social calendar was a whirl of art openings, film festivals, concerts, performances, and parties. When gatherings began to happen again after my friends and I were fully vaccinated, most times that I tried to be in groups of people, I drifted without saying goodbye. I did this at an outdoor birthday party. I just stood up, thought of the plants that were waiting for me back home, and walked out the front door. I would rather dwell in the land of biophilia than agoraphobia.

In June, I saw my mother for the first time in a year and a half—the first time since my book had come out. During our visit, she and I got through three days without saying anything to upset each other.

Then, as we waited in the car for my train back to the city, she asked, “What’s the latest with your book?”

“Are you writing another one?”

Assume Nothing: A Story of Intimate Violence

“Are you planning to write anything about the family?”

Sensing the concern in her voice, I answered, “I’m planning to write about plants.”

Now, as the summer passes and the variants threaten to distance us from each other again, I wonder if my plants will continue to comfort me. I know that at the least they will keep me company. In his song “The Secret Life of Plants,” Stevie Wonder sings, “…If you ask yourself where would you be without them you will find you would not.”

Is it possible that now I like plants more than people? The plants breathe life into me, literally. They purify the air around me. And humbly I note that I and anyone can tend plants, but we can’t tell them what to do.

Who Is Echo? <i>Hawkeye</i>’s Latest Villain Is Getting Her Own Show Too.
You Can Get a Tattoo That Lasts One Year
Speed Skaters Have to Wear Glasses on the Ice Because They’re Moving *That* Fast
The Gucci Heirs Do Not Approve of House of Gucci
Demi Lovato Shares in Instagram Story That They Are No Longer “California Sober”