If Carli Lloyd’s career as a professional athlete could be summed up by one image, it might be the one that went viral during the Tokyo Olympics: Lloyd, on the field, alone, running wind sprints in the 93 degree heat.

The U.S. Women’s National Team had just suffered a crushing defeat to Canada and after four Olympics, four World Cups, and 17 relentless years as a professional soccer player who always felt like she had something to prove, Lloyd would not be going home with gold. “I knew in that moment, which no one else knew yet, I would never compete in another major tournament with this team,” she says.

Lloyd allowed herself to feel the weight of the loss only briefly. The bronze medal game was in two days—there was work to do.

It’s the “outwork everyone” mentality that’s made Lloyd a legend on a team of legends like Mia Hamm, Brandi Chastain, Abby Wambach, Alex Morgan, and Megan Rapinoe, who have all also become activists in their own right in the fight for women’s equality. Lloyd was first and foremost always there to work, developing a reputation as the kind of player who never compromised, addicted to the grind no matter the cost. She sacrificed time, her body, and relationships. “I never skipped a step. I never took a shortcut. I chipped away little by little every single day and built myself into the best possible machine I could build,” she says. She thrived with an “industrial-sized” chip on her shoulder. She was, as they say, not here to make friends. 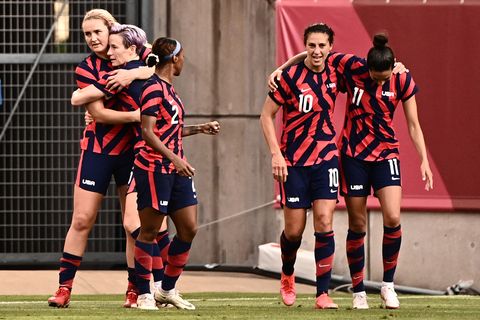 Lloyd’s teammates congratulate her for scoring a goal in the bronze medal match at the Tokyo Olympics.

But the same relentless pursuit of excellence that sometimes made her clash with players and coaches (Lloyd stood with her friend Hope Solo in 2007 when she was benched by the team for disparaging another goalie, even when Lloyd thought she might lose her own place on the roster because of it) also made her a reluctant icon. She played in 316 games and scored 134 goals. She won three Olympic medals and two World Cup championships. She was named FIFA World Player of the Year—twice. And she made sports history when she became the second player ever to score a hat trick (that’s three goals) in a World Cup Final. (The first, a male player, did it in 120 minutes of game time—Lloyd only needed 16.)

As her playing career comes to an end—just as the USWNT’s fight for equal pay comes to a head and the professional league she’s helped build faces a reckoning over a toxic coaching culture—Lloyd spoke to ELLE.com about being misunderstood, the lessons she’s learned on and off the field, and what she’s fighting for now.

You’ve made no secret of the fact that your goal was always to be the best soccer player, not the most popular girl on the team or the one who gets the most media attention. You’ve always been about the game. How did you navigate that on a team that has come to stand for so much more than soccer?

I’ve always just wanted my playing to do the talking. I never wanted to feel as if I had to dress a certain way or put on makeup and look pretty in order to get the attention of others or sponsors. I never wavered. There were some tough moments, but in the end, whether people have liked me or not, I think a lot of people respect the fact that I did it my way. It really makes you strong as a person to stick to your beliefs in a world where I feel like you can get pulled in so many directions.

When you walked off the field for the final time as a member of the U.S. Women’s National Team, you took off your iconic #10 Lloyd jersey to reveal a jersey with the name Hollins, your married name. What did that moment mean to you?

I had been going through that moment in my mind and what I wanted to do. Mia [Hamm] played the second half with her married name on the back of her jersey when she retired, but I’ve always wanted to be different—I’ve always done things my way. No one knew except for our equipment guy who had to print a second jersey to hang in my locker.

I’ll always be Lloyd playing on the field, but it was a way to honor my husband by walking off the field and making a gesture that this is about him and I. This is our next chapter together. He sacrificed so much, I’ve sacrificed so much. We have not had a whole lot of time together during the course of my career, but he has been the most supportive husband I could have ever asked for. It was just simply a moment where I could finally honor him and all that he’s done for me.

As you start to think about this next chapter, your first post-retirement partnership is with Agile Therapeutics, which is a contraceptive company. Why was supporting reproductive health at the top of your priority list?

Every partnership and sponsorship that I get involved with has to align with me as a person; this is a natural fit for this next chapter in my life. Obviously I’m shifting gears, and I think I’m eventually going to start a family. It’s about being able to have a choice.

Women have always had to make choices, it’s like either your career or a family. I chose not to have a kid while playing. I think you can have both but we’ve been taught that we can’t. I think it’s really important that I am partnering with companies who provide options for women’s health.

The NWSL is facing a reckoning after allegations of sexual misconduct and an abusive coaching culture have surfaced. What’s been your experience?

I’m shocked like everybody else. I had no idea. I was one of the first that read the article. Very, very disturbing, very sad. For Sinead [Farrelly] and Mana [Shim] coming out and putting themselves out there, I commend them. It was hard enough going through the situation at the time, I imagine, and then to bring it back up definitely stirs a lot of emotions.

A situation like this has put the NWSL in a position to hit the reset button, and things need to be better. All the players in the league deserve to be treated better. I really feel that this is going to be a positive change moving forward. I think it’s just a huge learning experience.

You’ve very much defined yourself by grit and hard work. Always the underdog, always with something to prove, always outworking everybody. Will you carry that mentality with you now that you’re retiring?

I’ve been telling a few people this: Retiring from being a professional athlete creates a void. There’s nothing that’s ever going to fill what we do. Playing in front of fans in a packed stadium —you don’t get that feeling anywhere else. And I’m okay with that. I’m okay stepping away from the game knowing that I’m not ever going to get that feeling again. I think where athletes go wrong in retirement is they try to seek to fill that void but I have so many other things that I’m about besides just soccer. I’ll probably pick up some golf, do some skiing.

“In the end, whether people have liked me or not, I think a lot of people respect the fact that I did it my way.”

You’ve talked a lot about feeling misunderstood as a player, even being made to feel not worthy at certain times. In this moment, as everybody’s reflecting on your career and all these tributes are pouring out, do you finally feel understood?

I do. I feel like my entire 17-year career, I was in quicksand trying to climb to the top. It did feel as if people didn’t quite understand what I was about as a person and as a player, and didn’t really see what I brought to the field. As I’ve wrapped up these last couple of months, the amount of support, love and messages—I’m sort of in a confused state because I’m like, “Where is this all coming from?”

For so long, I just felt like I had to constantly prove people wrong and prove my worth within this team. And it’s almost as if the world has now seen it.

This interview has been edited for clarity and length.