Not long after she entered graduate school, Molly* started dating Jim, a rather neurotic man who was notorious for sleeping around. He was the kind of guy who had issues with intimacy and ingrained sexism but tried to soften the blow with self-awareness. “I like you so much, but I couldn’t possibly be with you,” he’d say. “I’m so brainwashed by the patriarchy that I can only be attracted to women who are dumber than me with big breasts.”

It didn’t help that Jim was apparently still friendly with his ex-girlfriend, an “epic beauty” named Pam whom Molly would frequently see in the library. One day Molly stepped outside for a cigarette, and Pam followed her. Molly girded herself for an awkward situation, feeling the same kind of jealousy and intimidation she’d experienced in high school. But Pam immediately made it clear that she had other plans. “Are you dating Jim?” Pam asked. “That guy sucks and you seem really cool. Don’t let him treat you like garbage.”

“She really was, like, actively recruiting me to her coven. And it totally worked.”

To silently obsess about why a dude doesn’t like you, then have another awesome woman confirm that he’s the problem, not you, “is sooo validating,” Molly says. Pretty soon, their friendship transcended this shared negative experience. Long after Jim was out of the picture, the two women remained close. Pam became Molly’s “grad school ride-or-die friend.” She helped Molly get grants and edited her work and encouraged her. “She really was, like, actively recruiting me to her coven,” Molly says. “And it totally worked.”

Lots of women have a feel-good story of bonding with another woman over the same caddish, disrespectful, or adulterous dude. It can be a quick, cathartic moment of mutual acknowledgment or the spark of a years-long friendship. It’s inspired pop culture narratives like 2014’s romantic comedy The Other Woman, wherein a trio of jilted women take revenge on the same man who cheated on them. 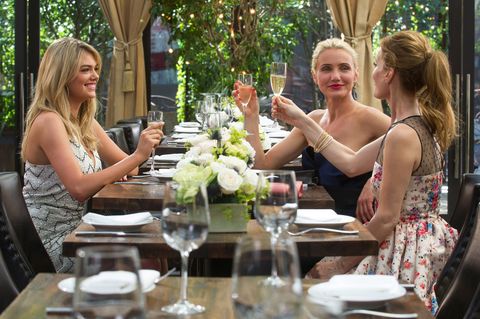 Kate Upton, Cameron Diaz, and Leslie Mann in The Other Woman.

Last year, Deux Moi facilitated some female solidarity when several women discovered they were all hooking up with the same celebrity. And recently, the entire internet had a front-row seat to this phenomenon when countless women on TikTok realized the same man had done them dirty with similar lovebombing-then-ghosting tactics.

The dustup quickly came under fire for needlessly piling on (and doxxing) a guy whose main crime was being inconsiderate. But several of his erstwhile Tinder matches agree that the silver lining of the whole debacle was connecting with each other, and possibly raising dating standards in the process. Shortly after the story went viral, one of the women told me she found herself in an immensely comforting group chat with two other women who’d been roped into the controversy, adding, “A lot of people put down women for gossiping,” but sometimes “it gives people the chance to identify something that might be of danger to them. It allows us to build solidarity among each other.”

Suzanne Degges-White, the chair of the Department of Counseling at Northern Illinois University and a co-author of Friends Forever: How Women and Girls Form Lasting Relationships, agrees that gossip can actually be a good thing. Historically, she says, “gossip is a survival mechanism where we’re sharing information that’s important to know…Gossip was designed to communicate social norms. It’s telling us what not to do, and it helps us know how to respond to a person who broke those social norms.”

Degges-White points out that gossip, much like female bonding over a romance gone bad, is distinctly gendered. When in a crisis, many of us, regardless of gender, tend to “befriend people we might not normally be friends with,” she says, but women in particular are socialized to deal with acute stress in a particular way. Studies have shown that women often transition from “fight or flight” to “tend and befriend” when they feel under threat. Men, on the other hand, often “don’t want to admit they were done wrong, because that’s an insult to their masculinity, and they don’t want to be painted as a victim,” she says. “That’s a socialization that guys don’t lose.” 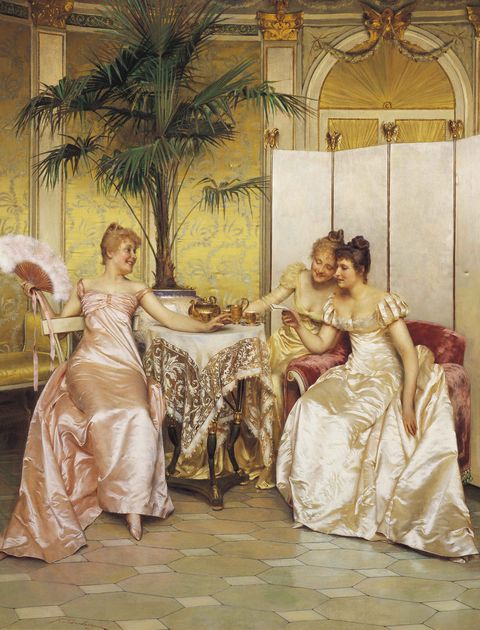 “Gossip was designed to communicate social norms,” says Degges-White. “It’s telling us what not to do, and it helps us know how to respond to a person who broke those social norms.”

This female solidarity wasn’t always so widespread. Before Second Wave feminism, women were discouraged from comparing notes. “Sisterhood is Powerful” sounds like an old-fashioned cliche now, but it was revelatory at a time when women were meant to see each other as romantic competitors. Breaking down this silence and atomization was a major political goal of the movement’s late-’60s consciousness-raising sessions. The impulse to compete with other women still endures; Molly, for instance, initially comforted herself with the thought that Jim liked her better than Pam. Still, she quips, it wasn’t a coincidence that Pam, the woman who helped her move past this feeling, was literally a “feminist philosopher” at her graduate school.

We can see this consciousness-raising legacy in movements like #MeToo, but we can also see it in these lower-stakes, everyday bonds between women, particularly when men’s misogyny is involved. The process of simply checking in with someone and confirming that you’re not delusional can be politically and personally powerful, especially during the tumult of love or lust. “We gave each other the gift of feeling validated, of letting go of feeling crazy,” a woman named Beck recalls about the time she connected over Instagram with her squirrely ex’s ex, Gab, a “bad ass female in music” who shared Beck’s red hair. Confessing and being vulnerable allows a feeling like empathy to prevail over jealousy and competitiveness. “As she told me her story I felt no animosity toward her, only anger toward him,” Gab says about the time she and Beck finally FaceTimed. She thought, “How dare he hurt her, this effervescent, kind, intelligent person.”

These situations don’t always result in lasting relationships. The dynamic could be similar to when we form a fast, bright, and temporary friendship on vacation, Degges-White says. But it’s also not surprising that a guy with good taste will hook up with multiple cool women that have something in common. These shared interests, rather than the initial crisis, can form the basis of an enduring bond. “I was initially just driven by curiosity and lingering crush obsessiveness,” says Elena, about internet-stalking a woman who’d also dated the same “awful” guy. “I asked her to get a drink with me to talk about him, but we got through all that material fast and turned to more interesting things, then ended up having such a great time that we actually became friends and hung out for many years.”

Ultimately, many women find that the friendship itself, and not the more visceral catharsis, has been the best thing to come out of their pain. One woman, Corrie, befriended the disgruntled girlfriend of a boy who made her an unwitting accomplice to his affair during her freshman year of college. Their friendship has lasted nearly 20 years. “The validation I was getting from his attention so paled in comparison to making an awesome new friend,” Corrie says. “The relationships with this woman totally took precedence over my relationship with that guy. Not only was it longer lasting, it was so much more fulfilling and made me so much happier.”

* names have been changed